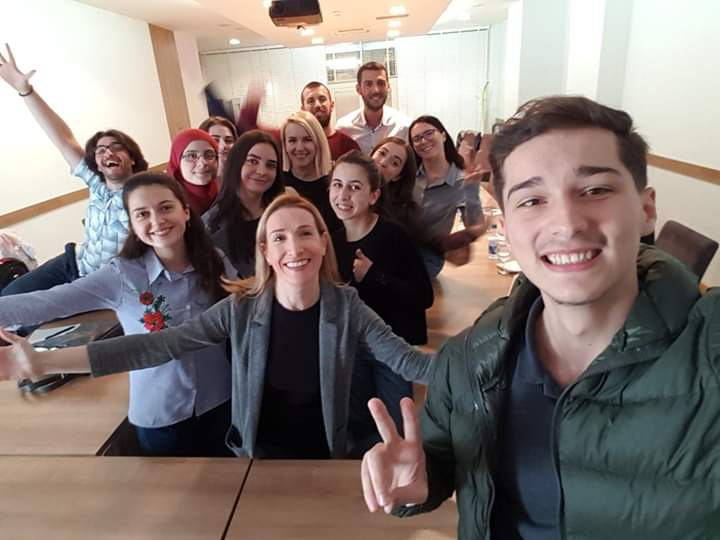 On June 27 2014, Centre for Political Courage (CPC), supported by the Regional Research Promotion Program (RRPP) and in cooperation with the University of Prishtina (UP), organized a roundtable with the purpose of discussing the “Strategy on Research/Artistic and Development Activities 2013-2016” and its impact on the work of the research institutes at the UP. Roundtable atendees included professors, heads of UP research institutes, the management of UP, including the acting Rector and prorectors.

The roundtable, which provided an opportunity to discuss the practices and challenges of carrying out scientific research activites within the research institutes of  UP, represents a continuation of CPC’s commitment to contribute towards enhancing social science research capacities in Kosovo.

The roundtable was opened by prof. Arben Hajrullahu who mentioned some of the best practices embraced by countries in the region and which, according to prof. Hajrullahu, could be emulated in order to improve the current policies that relate to carrying out research projects in Kosovo. Prof. Hajrullahu presented some of the findings and recommendations of the briefing paper “The State of Research in Social Sciences at the University of Prishina” with the aim of presenting an overview of the current situation regarding implementation of the “Strategy on Research/Artistic and Development Activities 2013-2016” and so as to push forward the debate on this topic.

Prof. Hasnije Ilazi, director of the Institute for Social and Human Studies  (ISSH) within the Faculty of Philosophy and Vice-rector for International Relations, elaborated the weaknesses that accompanied the drafting process of this strategy, highlighting in particular that the academic staff was insufficiently involved in this process. According to Prof. Ilazi, the planned activities of the strategy are very ambitious but not feasible. Among other recommendations, prof. Ilazi sugested that the academic staff should be motivated to promote the link between research and industry; that administrative support should be provided for research projects; and that a seperate strategy on the internationalization of  UP’s research work should be developed.

In addition, the other participants raised many related issues such as lack of complementarity between research on the one hand and labour market and societal development needs on the other. They also emphasized the need for the further development of institutional capacities for strengthening advocacy and fundraising skills, as well as the need to strengthen the capacities for absorbing funds from external resources.

The roundtable findings will be summarized in a document which will present the obstacles and offer specific recommendations for the management and the academic staff at the UP. 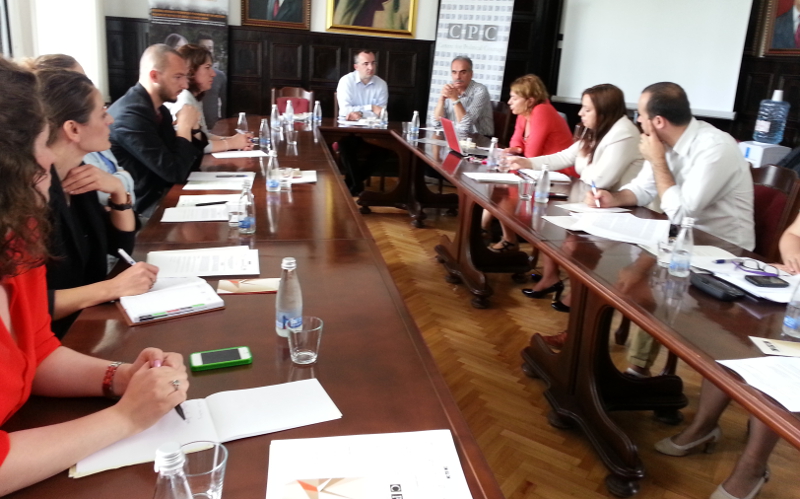 CPC, within the framework of its initiative to strengthen social science in Kosovo, organized a conference entitled “Research and Development in Kosovo in the light of the EU integration perspective: Quoi vadis?”. The conference took place on December 3, 2013.

Conference attendees included representatives of the Swiss Embassy in Kosovo; Rectorate of the University of Prishtina (UP); university professors; members of the Ministry of Education, Science and Technology of Kosovo; Committee for Education, Culture, Youth, Sports, Public Administration, Local Government and Media at the Assembly of Kosovo; German Embassy in Kosovo; Austrian Agency for Development; and representatives of think tank organizations.

In her introductory remarks, Her Excellency Krystyna Marty Lang, Switzerland’s Ambassador to Kosovo, stated that research activities and social sciences play an irreplaceable role in economic development, as well as in the development of democratic culture in Kosovo. Mrs. Ambassador highlighted that she is happy that the Swiss government, through the RRPP, is supporting human and social science research in Kosovo and in the region.

The pro-rector for research activities at the UP, prof. Avdulla Alija, mentioned that the main challenges that the UP faces with respect to research, include lack of project management capacities and absorptive capacities. The Pro-rector concluded that the state of scientific research at the UP is poor.

In the panel “Interaction between Research, Innovation and Economic Growth”, it was mentioned that informality remains the main barrier to sustainable economic development in Kosovo. It was also noted that Kosovo should focus on strengthening the following three crucial aspects: the rule of law, good governance, and proper management of the budget.

In the subsequent panel on the “State of Social Science Research at the University of Prishtina”, the panelists discussed the recommendations of the RRPP LCU Kosovo policy dialogue briefing paper with the same title.  It was highlighted that the main challenge at the UP is its very centralized organizational structure. Due to lack of financial autonomy, this institution has lost many opportunities to generate external sources for research projects.

The panel discussion on “Ethics in Academia and Research work in Kosovo” stressed that, although the Law on Education regulates the issue of ethics in academia and research, this law is not being implemented at all. One of the conclusions was that, while universities from other countries confront their ethics problems, in Kosovo these problems are being largely ignored.

The panel on “Policymaker impact in research work in Kosovo” discussed the laws and regulations concerning research. The panelists stressed the importance of fostering the cooperation between academics and policymakers. 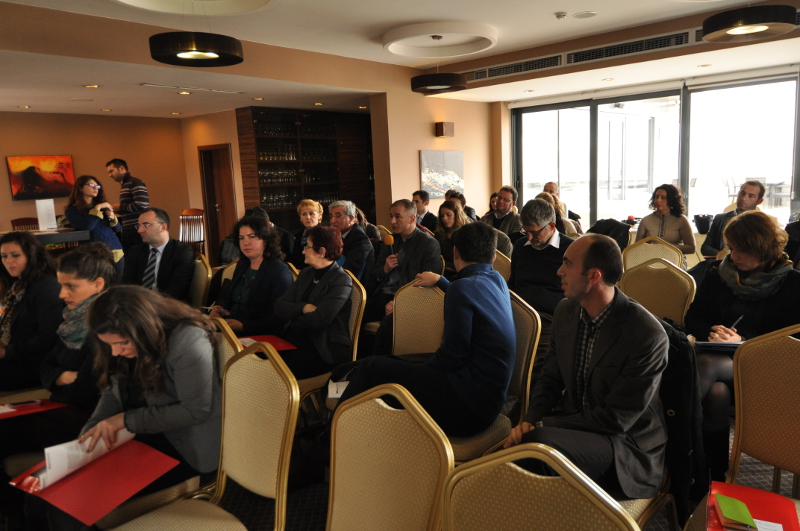 As a follow up of the policy dialogue initiative in Kosovo, on 25 June 2013, CPC organized a roundtable on the “State of research at the think tank organizations in Kosovo”. The roundtable was attended by several representatives of most active think tanks and international donors that are supporting research in Kosovo.

Prof. Arben Hajrullahu opened the roundtable by presenting the recommendations made in the Policy Brief on Social Science Research in Kosovo and he stressed the importance of international donors as crucial factor in supporting Kosovo to strengthen research capacities.

Mr. Christian Geosits, head of the Austrian Development Cooperation (ADA) office in Kosovo, presented briefly the policies that ADA pursues in supporting Kosovo, including higher education sector and some few research activities. Mr. Geosits emphasized that ADA has raised its concern with regard to research market in Kosovo and regulation of this sector is of utmost importance. He said that he is not sure whether ADA’s programs address the needs of researchers in Kosovo, as ADA mainly follows the guidelines of National Research Strategy in Kosovo. Parallel to this, he stressed that ADA cannot follow preferences of think tank organizations in Kosovo as ADA is pretty much is focused in Kosovo’s public institutions and policies.

Ms. Sophie Beaumont, representative of the European Commission Liaison Office in Kosovo, stated that the possibilities for research funding are enormous but the disadvantage of Kosovo is its ability to compete in a very competitive regional and European market. In this regard Ms. Beaumont recommended the think tanks in Kosovo to focus on building capacities in writing research project applications.

Representatives of think tanks in Kosovo stressed the everyday challenges. It was highlighted that they have often faced lack of trust and the credibility while applying for Kosovo’s public funds dedicated for research. Think tanks do not feel welcomed from policy makers to cooperate with them and they do not refer to research when making decisions. However, all think tanks representatives agreed that cooperation with universities should be increased. Moreover it was stated that contrary to most of the countries in the region, think tanks in Kosovo are not politicized which fact makes more difficult for them to absorb public funds.

A summary of the roundtable’s findings will be published in the form of a briefing paper in the upcoming weeks.

On 21 May 2013 the CPC organized within its policy dialogue initiative the roundtable on the “The Impact of the Decision Making Community in Research in Kosovo”.  The roundtable aimed to identify best practices to strengthen the cooperation between the research- and the decision making community in order to enhance scientific and research capacities in Kosovo. At the roundtable came together researchers, members of Ministry Education, Science and Technology of Kosovo (MEST), members of the Committee for Education, Culture, Youth, Sports, Public Administration, Local Government and Media of the Assembly of Kosovo, and professors of the University of Prishtina. Participants discussed the budget allocated for science and research in Kosovo, the legislative framework, and the implementation of National Science Programme of Kosovo.

Prof. Arben Hajrullahu presented recommendations made in policy brief on Social Science Research in Kosovo and stressed the need for higher commitment and financial support to science and research. Moreover, according to prof. Hajrullahu ‘there is no sustainable development and economic growth without genuine investment in science, research and innovation’.

Mr. Murteza Osdautaj, director at the Department for Science and Technology at the MEST, presented the National Science Programme of Kosovo and its implementation. Mr. Osdautaj emphasized that one of the problems is the lack of capacity to absorb funds by the research community in Kosovo. During the debate, however, researchers expressed that one of the reasons of the lack of absorption capacities are the complicated procedures and criteria to apply for funds. Parallel to this several researchers stressed that the programme is more focused on procedures and on applying criteria rather than on result of the research work.

Mrs. Teuta Haxhiu, member of the Committee for Education, Culture, Youth, Sports, Public Administration, Local Government and Media at the Kosovo Assembly, emphasized the necessity to lobby for higher budget for science in Kosovo. According to Mrs. Haxhiu it is essential that all stakeholders cooperate closely to identify the measures needed for further advancing science and research activities in Kosovo. Mr. Afrim Kasolli, member of the same committee at the Kosovo Assembly, highlighted that the current law foresee the 0.7% of the total budget should be dedicated for science. However, he criticized the fact that there is no sufficient monitoring and most of the laws are not implemented entirely.

A vivid debate concluded the roundtable where presenters addressed questions and concerns of the scholars present. 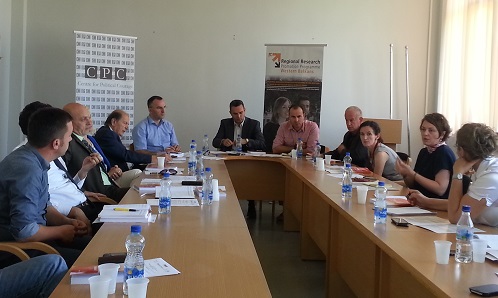 The Rector of the Prishtina University (UP), Prof. Dr. Ibrahim Gashi, welcomed the organisation of this international conference and expressed his gratitude to the RRPP and the Swiss Agency for Development and Cooperation (SDC) in Kosovo for making it possible. Moreover, Rector Gashi stressed the readiness of the UP to strengthen its exchanges and cooperation with universities and scientific programmes, such as the RRPP. The director of the SDC, Mr. Markus Baechler, pointed out that the SDC supports social sciences in Western Balkans countries because they have a fundamental role to play in transitional societies. The manager of the RRPP, Ms. Jasmina Opardija-Susnjar, briefed participants about the main aims and goals of the RRPP, in addition to its roles and challenges in strengthening research capacities and scientific cooperation in the region.

Within the conference, three panels and a round table were conducted.

The roundtable entitled, “Trends and Challenges in Regional and international Cooperation in Research and Teaching”, offered some concluding remarks at the conference. UP professors, professors from the region and other European countries, representatives of the FP7 and Tempus programmes, as well as representatives from the Ministry of Education, Science and Technology of Kosovo (MEST) and the Ministry of Education and Sciences of Albania (MASH) discussed the main challenges in the university and research sectors regarding transitional societies (such as Kosovo), with the addition of future opportunities for cooperation in research and education.

Conclusions and recommendations resulting from this conference will be published in a policy brief that will be distributed to all relevant stakeholders and decision-makers shaping research and higher education in Kosovo. 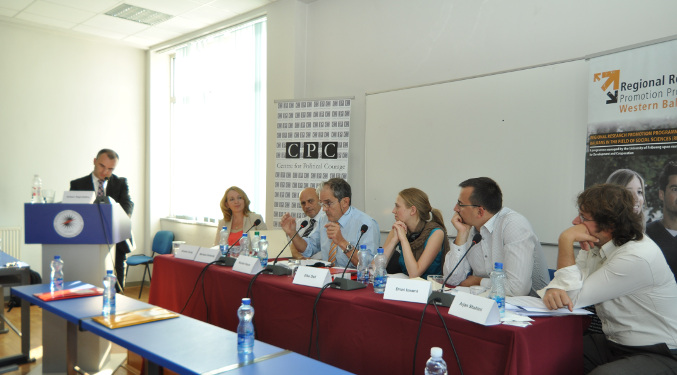 What is Lorem Ipsum?

Lorem Ipsum is simply dummy text of the printing and typesetting industry. Lorem Ipsum has been the industry’s standard dummy text ever since the 1500s, when an unknown printer took a galley of type and scrambled it to make a type specimen book. It has survived not only five centuries, but also the leap into electronic typesetting, remaining essentially unchanged. It was popularised in the 1960s with the release of Letraset sheets containing Lorem Ipsum passages, and more recently with desktop publishing software like Aldus PageMaker including versions of Lorem Ipsum.